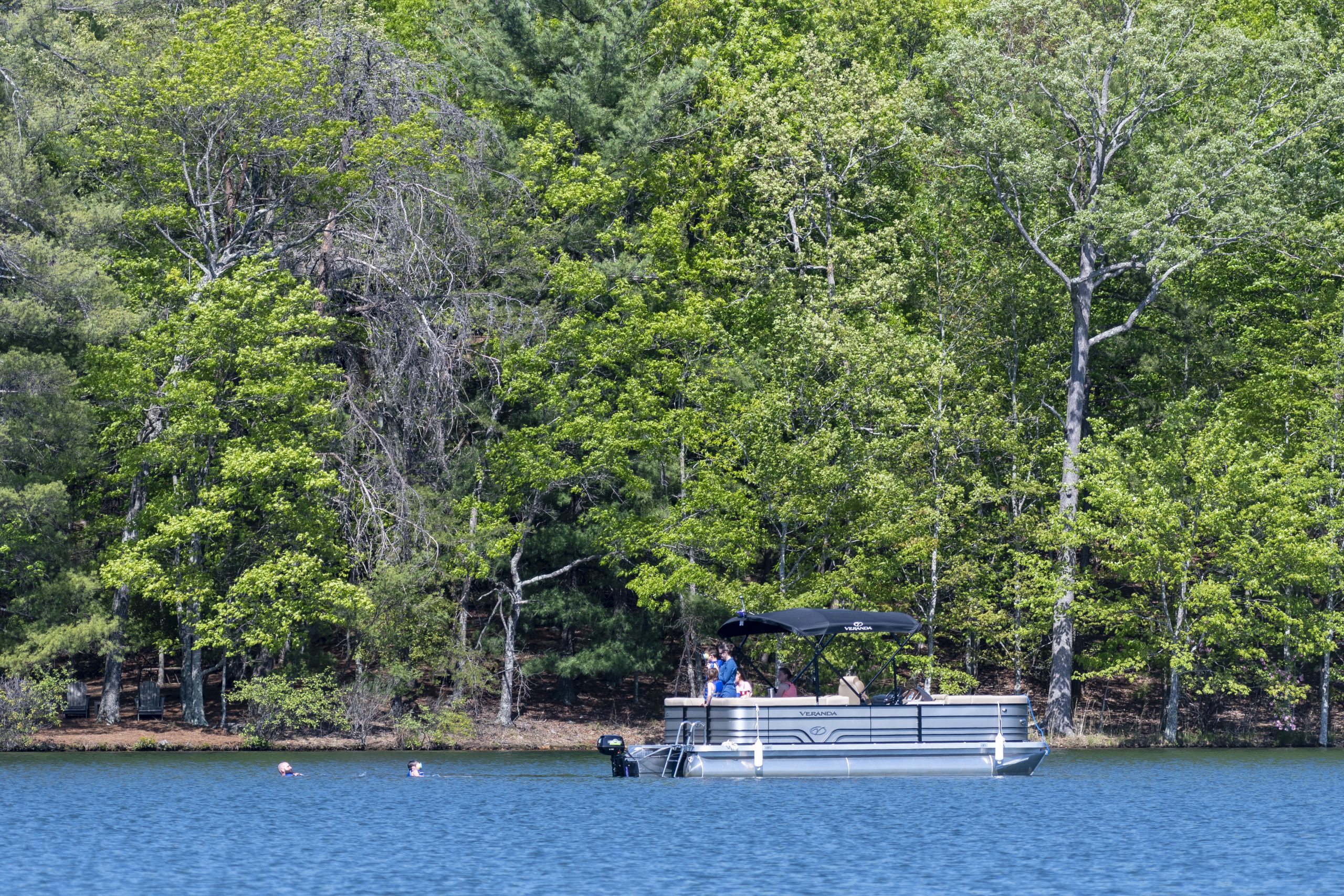 The property, affairs and business of the POA shall be managed by a Board of Directors consisting of the number of persons set forth in Section 3.4.

the property owners of Big Canoe. The responsibility for governance and the authority to manage the affairs of the community rests solely with the Board of Directors. The Board's role is to decide the policies of the POA, which are designed to ensure the enforcement of the Declaration, preserve and protect the assets of the POA, assure that the financial condition of the POA is adequate to meet its mission, goals and objectives, and provide and monitor a process for overall planning both long and short range.

3.4 Composition of the Board

At the annual meeting to be held in December 2006, the Board will increase to seven (7) directors, six (6) of which will have been elected by the property owners at large, and one appointed  by the Developer. As long as there is a Type 11 D11   member in accordance with  Article III, Section 2 of the Declaration, there will be one (1) Developer-appointed Director.

[A Special Election was held in early 2005 to increase the number of Elected Directors from three (3) to four (4) as the first step in transitioning to the seven (7) member Board.  Thereafter

two (2) Elected  Directors  will be elected  annually (until there  is no longer a Type "D" member) in order to achieve, by 2007, the desired seven (7) member composition and to maintain that level ongoing. After there is no longer a Developer Director, the seven- (7-) member composition will be maintained by the Association members electing a third Elected Director every three (3) years.] 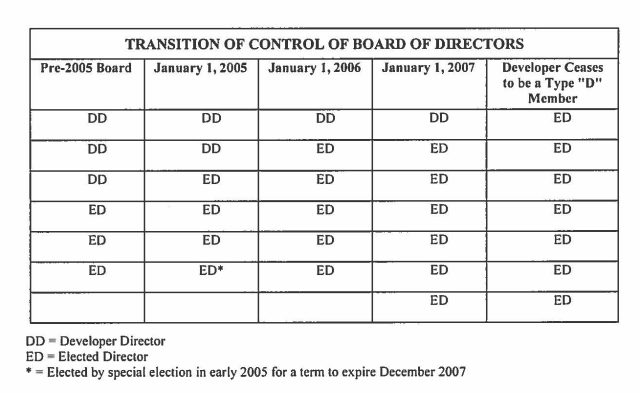 The method of election, term of office and filling of vacancies for Elected Directors shall be as follows:

During the "Candidate Qualification Period," which shall begin on March 1st and end on June 30th of each year, any individual who meets the qualification standards set forth above will be eligible to run for a vacancy on the Board. The Election Committee is responsible for determining each candidate has met all qualifying standards set forth above. If the number of qualified candidates averages more than two (2) per vacancy, a Primary Election will be held. The purpose of the Primary Election is to identify two (2) candidates for each vacancy to compete in the General Election.

On an ongoing basis before and during the Candidate Qualification Period, the Election Committee shall actively encourage community recruitment of candidates.

C. Primary Election. If the number of qualified candidates requires a Primary Election, as described above, ballots will be mailed to all Members with the August POA statement or with a separate mailing if legal requirements dictate. The Election Committee will be responsible for coordinating with the POA to have the Primary Election ballots counted and the results announced by September 20th of each year.

The Election Committee will recommend to the Board the means and methods for disseminating information about an election and the candidates.   The Election Committee shall be responsible for coordinating with the POA to have the General Election ballots counted and the results announced at the annual meeting.

E. Voting. Only  Types "A", "B", "C", and "E".   Members  shall  vote  for  Elected Directors. If the Company is a Type A, B, C, or E Member, it shall be qualified to cast these ballots. A ballot or proxy listing the names of the candidates for Elected Directors and the name of the Developer Director designated to serve by the Developer for the upcoming year shall be mailed to all Members and transmitted with the notice of the annual meeting as provided in these By-Laws.  In order to be counted, all ballots must be received by the POA by the date specified in the ballot material, and no voting in any form shall be permitted beyond that date. The candidate(s) receiving the highest number of votes shall be selected to fill the vacancy(ies). The election of the Elected Directors and the designation of the Developer Director shall be announced at the meeting.

The term limitations set forth above shall not apply to the Developer Director.

In the event that multiple vacancies occur so as to prevent the Board from convening a quorum in order to conduct business, a majority of the remaining directors shall appoint a sufficient number of additional property owners to the Board for a temporary period to permit a quorum to be convened. The Board shall then call a Special Election to fill all of the initial vacancies (i.e., those existing before the appointment of members for a temporary period) for the balance  of  the  terms.   The  Board  shall  conduct  the  Association 1s  business  with  its  temporary members until the newly elected directors are seated.

H. Special Elections. Special Elections will generally follow the above-defined procedures except that ti1e Board reserves the right to expedite the process to meet the needs requiring the Special Election. The Board shall set the qualifying period. The Board  may conduct an election at a time of its choosing following the announcement of the qualified candidates, and even if there are more than two (2) candidates per vacancy, the Board may choose to conduct a General Election first.  In this case, if any candidate receives a majority of the votes cast, that candidate would be declared the winner of any single vacancy, or in the event of multiple vacancies, be declared the winner of one (1) of the vacancies. If no candidate receives a majority in the General Election, or if there are multiple vacancies to be filled, a run off election for the two (2) candidates per vacancy who received the most votes will be held on the business day closest to thirty (30) days after the results of the General Election are known.

The Directors shall receive such reasonable remuneration or compensation for their services and reimbursement for their out-of-pocket expenses when they incur travel expenses in attending annual or special meetings, as the Members may from time to time determine. Beginning with persons elected at the annual meeting in December 2007, no director shall be an employee or contractor of the Association.

The annual meeting of the Board shall be held without notice immediately after the annual meeting of the Members. Notice need not be given of regular meetings of the Board held at times fixed by resolution of the Board.   No notice of any meeting need be given any Director who attends such meeting, unless any such Director attending at the beginning of such meeting states any objection or objections to the place or time of the meeting, to the manner in which it has been called or convened or to the transaction of business. Further, notice shall not be required to be given to any Director who at any time before or after the meeting waives notice of the meeting in writing.

Any Director may participate in a Board meeting by conference telephone or by similar communication equipment by which all persons participating in the meeting can hear each other. Participation in a meeti

Four (4) Directors, at a meeting duly called and assembled, shall constitute a quorum for the transaction of business, unless otherwise specifically required by statute, the Articles, the Declaration or these By-Laws, and the act of a majority of the Directors present at a meeting at which a quorum is present shall be the act of the Board of Directors. If at any meeting of the Board there shall be less than a quorum present, a majority of those present may adjourn the meeting, without further notice, from time to time until a quorum shall have been obtained.

A. Automatic
An Elected Director shall automatically be removed from the Board of Directors without a vote of the Members of the Property Owners Association for the following reasons: (A) falsification of any information required to qualify as a candidate submitted to the Election Committee; (B) unexcused absences from four (4) consecutive monthly Board meetings or a total of five (5) within any twelve- (12-) month period; or (C) ninety (90) days or more delinquency in paying assessments, charges or fines to the POA; and (D) evidence of a felony conviction discovered during a background investigation or by any other means.

B. Removal by Members
Any one or more Elected Director may be removed by a majority vote of the membership. A Board member's removal may be proposed by a majority of the members of the Board or by Members in good standing with the Property Owners Association representing at least five hundred (500) votes. A petition bearing the names of Members demanding the removal shall be presented to the Secretary. The Secretary shall have five (5) days to verify the names on the petition. If the petition is verified, or if the request is from a majority of other Board members, the Secretary shall cause a ballot to be mailed to every Member to vote for or against the removal of the Board member(s).   All ballots must be returned within twenty (20) days of the date of mailing.

The Secretary shall be obligated to call a special meeting of the Members to be held at least ten ( I0) days prior to the due date of the ballots. At such special meeting, the Board member(s) whose removal has been proposed shall be given the opportunity to be heard.

If a Board member(s) is/are removed, either automatically or by a vote of the Members, the vacancy(ies) shall be filled in accordance with Paragraph 3.50.

3.11 Unification of the Board of Directors

At the annual meeting next following such time as the Developer ceases to be a Type "D" Member (and thereupon voting solely as a Type "A,U "BU, "C", or "E" Member, as the case may be), all of the Directors shall be Elected Directors serving staggered terms. During the next regular election following such time, an additional Member (taking the place of the remaining Developer Director) shall be elected for a term of three (3) years.
QUESTIONS?
Ask the POA